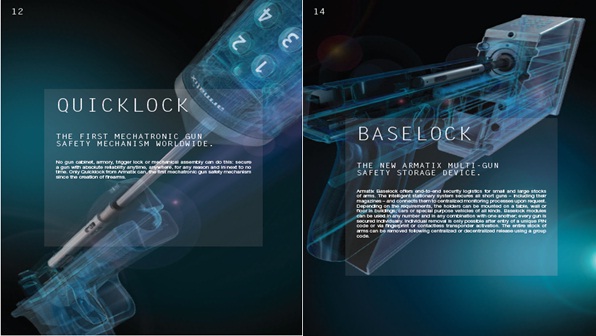 reliability anytime, anywhere, for any reason and in next to no time. Only Quick-lock from Armatix can, the first

mechatronic gun safety system since the creation of firearms.

called control unit. The blocking device is exactly sized to correspond to the respective caliber is manually

inserted into the cartridge chamber. By application of slight pressure it locks automatically and in this way

secures the weapon from within. For release, a link between the blocking device and the control unit has to be

release data to the blocking device. After that the device can be removed easily within fractions of a second.

(c)                 With an Armatix blocking device in the cartridge chamber, the gun is more effectively protected against

misuse than in the gun cabinet. Unauthorized violent removal of the Armatix locking element irreparably destroys

ammunition – it is impossible to load a cartridge in this secure state.