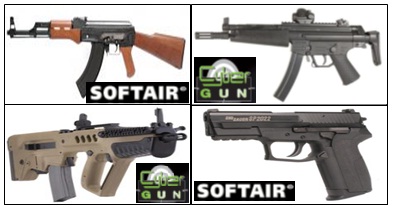 1.             With advent of modern times, good old field and battle craft has taken a back seat over a period of time leading to

loss of precious lives in actual operations. This faltering on age old edict has also been due to lack of suitable training

weapon system which can actually fire on the opponent. Further before an individual soldier progresses to Simulator

systems, there is a need to give him a real feel of the weapon he is likely to handle and train on. All of these factors are

2.             SoftAir training guns are available for most of the modern weapon systems (assault rifles as well pistols) existing

in the world (Kalashnikov, Tavor, FAMAS, Sig Sauer, Colt, H&K and FNH). These weapons are made after obtaining due

license from the original manufacturer, hence the design, weight and other parameters are exactly similar to the original

weapon. This gives an actual feel of the original weapon to the soldier during training.

trajectory followed is similar to the actual weapon including the blow back. Using colored BB, these can be used by two

teams for actual firing on the opponent as well as practice field craft/battle craft.